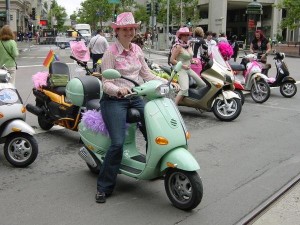 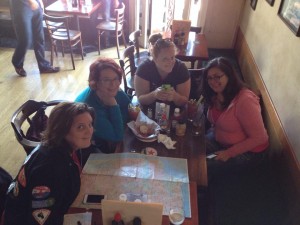 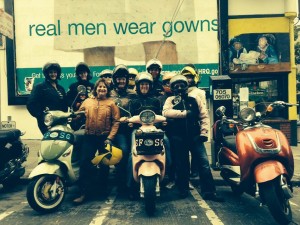 The Way We Were

The San Francisco Scooter Girls was founded in 2004 by Jennifer (Martinez) Farrell.  That year, Jen found herself with time on her hands, a new hobby she was interested in pursuing, but no friends with whom to ride.  She had purchased a Yamaha Vino and her experience was that the scene was dominated mostly by men who rode and loved vintage bikes passionately and were not as welcoming to new riders, females, or modern bikes.

However, as she rode around San Francisco, she noticed lots of other girls riding scooters.  As she was hoping to find some friends to ride with and socialize with, she started the Yahoo! Group and began contacting girls through email and fliers.  She wanted to create a group that did not discriminate based on gender or the type of bike you rode – hence our motto “Any Girl, Any Scooter”.  She envisioned a club with different levels of involvement so that any girl on whatever scooter she rode could come and be part of the community at a level of commitment that worked for her and for the club.

The Yahoo! Group exploded from there to 200 plus members. It was an open forum serving all aspects of the scooter community: modern, vintage, gay, straight, women, and, yes, even men (who were at that time affectionately called ‘groupies’ since they couldn’t and can’t be full club members).

Thanks for everything Jen!

The Way We Are Now

The Facebook page is predominately the place to find us these days. The Yahoo! Group is still up and running but sees a lot less traffic as we’ve transitioned. We strive to make our pages friendly and open to all riders – especially women, to come and ask questions about scooters and scootering. Facebook is a great place to keep up to date with what the club is doing.  Membership to Facebook is not necessary to view our Facebook page, although members will receive notifications with information about the events we host or are involved in such as: riding workshops; safety refresher courses; rally representation; maintenance workshops; fundraising events; our Club Meetings, and our Social events. From time to time subscribers will receive information about discounts at local scooter stores and special offers from vendors as well. You can also subscribe to notifications by email, below.

You do not need to be a club member to attend our events. We encourage and welcome everyone to come on out and ride with us!