Review: The Gear I Wear by Noemi

I’m going to start from the bottom up. 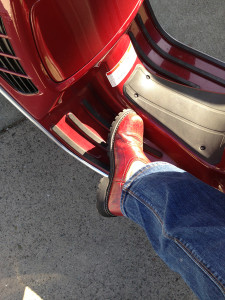 For a long time I looked for motorcycle boots that were cute but protective, and not too blinged out. I haven’t given up on finding them, but the search was disheartening enough that I’ve stopped looking for a while. I have two pairs of Ariat roper style boots that are as comfy as slippers. I had the shoe guy on Irving near 9th put Vibram soles on them to give them grip. (Side note: I’ve been pronouncing Vibram wrong my whole life, just learned the correct pronunciation recently.) These don’t have ankle support, but at least they aren’t flip-flops, which yes, I’ve seen people scooter in. Every once in a while I’ll be going some place fancy and wear ungrippy shoes. You just need to be careful to stop well and not put your feet down on something slippy. Alternatively, you can put Vibram soles on just about anything. (Oooh, maybe I should get a pair of bunny slippers soled up for Easter!)

I mostly ride in flannel lined jeans because I’m always cold, and I hate being cold. I may be the only woman in a 100 mile radius to be looking forward to having hot flashes. I also have a Scooter Skirt, though I tend to use it only for really cold or wet weather. The Scooter Skirt keeps me delightfully warm. I had to scooter to a symphony performance once, and I managed to fit my jacket under my seat, and my Scooter Skirt and helmet in my top case, and walk in looking all orchestra-appropriate, but on the way home I was nicely warm and dry. I often wear tights or leg warmers. Did I mention I hate being cold? 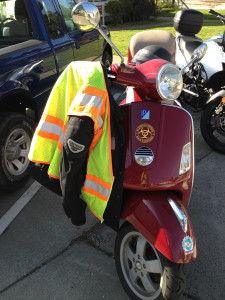 I own a leather jacket for nicer weather. (Let’s face it, it is rarely actually hot in San Francisco.) In the winter I wear a First Gear jacket. I’ve changed sizes recently so that a lot of more stylish jackets now could fit me, and I may look in to something new soon, but the First Gear jacket is fantastic in the warmth, dry, protection, and infinite number of pockets. It’s got a big fat zipper that goes on easily. Have I ever scootered without a jacket? Sure. That one hot day a year where I have one short errand to run. But I believe that if you dress for the weather (which is always around) you’ll be dressed for the crash (which may be around) and luckily for me, in SF it’s always cold enough to dress with a few protective layers. 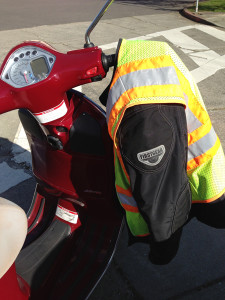 I wear a safety vest over my jacket. If I’m going on a sexy date or something, I might tuck it under the seat or only wear it at night, but for my every day commuting, I wear it all the time. I didn’t used to. And I didn’t change my mind because someone lectured me or a car driver said “I didn’t see you!” though both have happened. I wear it because I was following a friend through the MacArthur tunnel on Park Presidio and the tunnel lights were out. All I could see of her was her three inch square tail light. It looked like nothing. There was no perspective to show me how close or far away that light was. And here’s the other thing: the amount of hot/cute/sexy that I can muster in a leather jacket without a safety vest is only so much. The amount of safety that I can muster by wearing the vest is probably four times that amount. So, safety over sexy most of the time for me. I feel better with it on, especially at night.

It took me far too long to learn this, but I have a fleece jacket with a windproof outer layer that is the best thing ever for wearing under my First Gear jacket because it is fuzzy on the inside (in case of short sleeves) and adds more protection against the wind, but also has two awesome features that a hoodie just doesnt: 1 – the wrists are adjustable, so I can really keep the wind out. 2 – it is an actual jacket, so that after I get to work, if I need to walk to lunch or something, I have a jacket! Don’t wait as long as I did to discover a great under-jacket layer. If it is really cold I’ll wear a neck tube fleece thing or a balaclava. I usually won’t wear a scarf even though I’m pretty sure I’m not going to go all Isadora Duncan all over the place.

This is my weakest point right now. I have a “summer” pair of thin leather gloves that are great in that I can feel everything, but they are old and worn too thin in places, and are too short around my wrists. My winter pair of gloves is old and feels like mittens. They really aren’t grippy or nimble enough. I had a crash in them two years ago and still haven’t replaced them. I’m thinking about gauntlet style gloves. 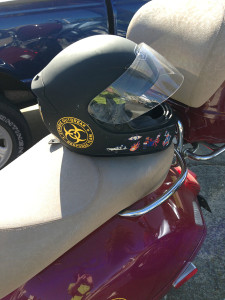 I keep a half shell at work in case I need to suddenly take on a passenger, and if it is nice out and I need to run errands on the scooter at lunch time, sometimes I’ll wear it so that I don’t have to take my helmet on and off. I have a 3/4 shell that matches my scooter that I’ll wear on dates and such. But mostly I wear my full face helmet. A full face helmet has a definite cost that almost no one talks about, and is neck strain. A full face helmet weighs more than other helmets, and catches the wind more. If this cost is acceptable to you, than that’s fine, but don’t pretend it doesn’t exist. I wear a full face helmet for a few reasons, one of which is that I still hate the cold. I also like the shape of my jaw, and the way my chin is attached to my face. I’ve heard that crashes rarely do that: road rash off half of your skull. I guess it’s just a feeling I have then that they are safer. Mine is getting old – and you really should replace them as they wear out – and I might look into a flip up helmet, but I think that might be too much helmet for me. I wouldn’t mind a helmet with a flip down sun visor. Speaking of which, I really need to replace my visor. 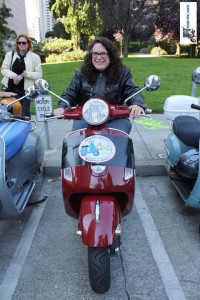 I wear glasses, and at night that gives me some eye protection. In SF, the fog will often cover my visor faster than I can wipe it away. After that I’ll put the visor up, but then sometimes even my glasses get foggy. Every once in a while I have to pull over to really clean them off. I don’t have clear safety glasses. I think they are dorky, but my friend wears a 3/4 shell helmet on the highway and at night he wears clear glasses so he doesn’t take a pebble to the eyeball. I have two pairs of prescription sunglasses. One pair is super thin and super dark. They fit tight to my head, and wind doesn’t bug my eyes. But they are dark enough that on sun and shadow dappled roads it is hard for my eyes to adjust. I have a pair of less-tinted glasses that is perfect for hazy days where I want some sun protection, but not a lot. When sunglasses are polarized, there can be some color spectrum shift, so keep that in mind. 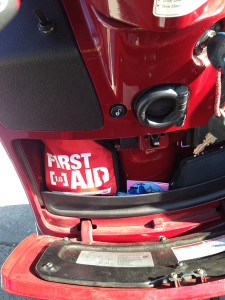 I guess that’s about it. When I went on long motorcycle rides, I used to wear ear plugs. I haven’t done that in a while. Oh yes – this is also important – the gear you’re not wearing! I keep a hat, a bandana, a first aid kit, a city map, change, a reusable shopping bag and other items in my scooter at all times. I want to be prepared for being stuck someplace due to scooter failure or an earthquake or whatnot. You might also want to keep rope or a bungie around for when you’re zipping home and suddenly see that amazing lamp by the side of the road that you just have to fit on to your ride somehow.

Well, that’s what I have and those are my opinions.